If your family is like many in the United States, unloading the week’s groceries includes hauling a case or two of bottled water into your home. On your way to a soccer game or activity, it’s easy to grab a cold one right out of the fridge, right?

But all those plastic bottles use a lot of fossil fuels and pollute the environment. In fact, Americans buy more bottled water than any other nation in the world, adding 29 billion water bottles a year to the problem. In order to make all these bottles, manufacturers use 17 million barrels of crude oil. That’s enough oil to keep a million cars going for twelve months. 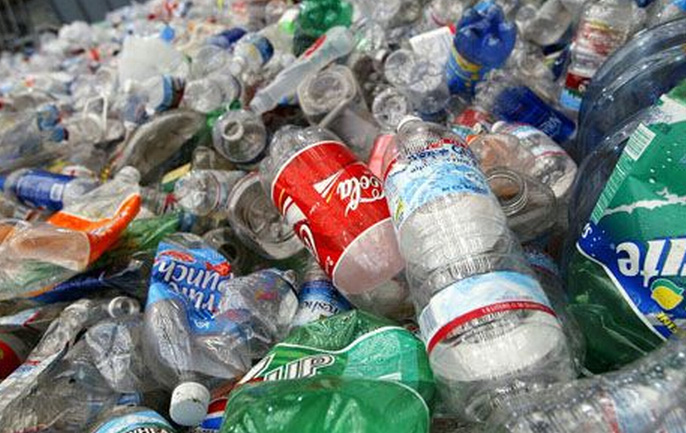 For every six water bottles we use, only one makes it to the recycling bin.

Imagine a water bottle filled a quarter of the way up with oil. That’s about how much oil was needed to produce the bottle.

So why don’t more people drink water straight from the kitchen faucet? Some people drink bottled water because they think it is better for them than water out of the tap, but that’s not true. In the United States, local governments make sure water from the faucet is safe. There is also growing concern that chemicals in the bottles themselves may leach into the water.

People love the convenience of bottled water. But maybe if they realized the problems it causes, they would try drinking from a glass at home or carrying water in a refillable steel container instead of plastic.

Plastic bottle recycling can help – instead of going out with the trash, plastic bottles can be turned into items like carpeting or cozy fleece clothing.

Unfortunately, for every six water bottles we use, only one makes it to the recycling bin. The rest are sent to landfills. Or, even worse, they end up as trash on the land and in rivers, lakes, and the ocean. Plastic bottles take many hundreds of years to disintegrate.

Water is good for you, so keep drinking it. But think about how often you use water bottles, and see if you can make a change.

And yes, you can make a difference. Remember this: Recycling one plastic bottle can save enough energy to power a 60-watt light bulb for six hours.